Smartphone Training Provides Independence and Access to Outside World 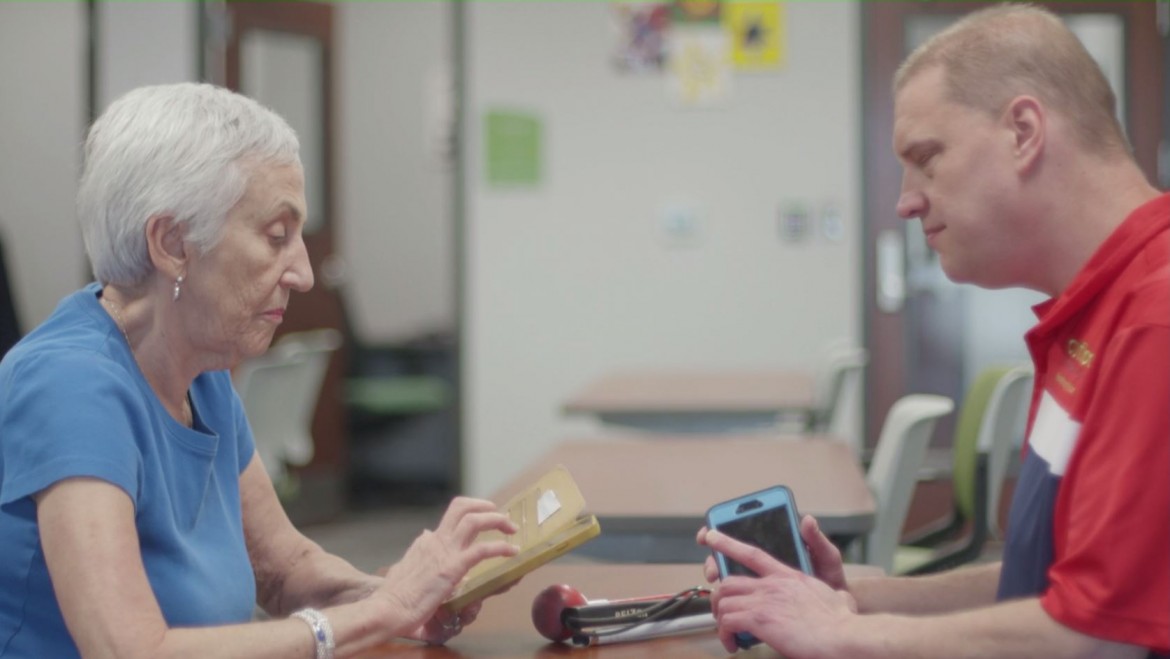 When Marsha Kleinberg became visually impaired, she lost her ability to work with her smartphone. She felt isolated. Marsha regained her independence through Outlook Enrichment’s technology training program. This independence gave her access to the outside world again. Because of your generous support, Marsha moves more freely in the world through the usage of her smartphone.

“I'm visually impaired, but I don’t know how far it will go, and as you lose your ability to work with your smartphone, discovering Outlook was a real lifeline for me,” said Marsha.

This training showed Marsha how to access emails, use Siri and read books on BARD and Audible through her iPhone.

“Most of the emails I get are garbage. But now I can get rid of the garbage and keep the important messages,” she said. “It's very important to have that knowledge.

Being a visual learner made it hard to keep track of things after her vision loss. Now, her smartphone keeps her organized. She learned how to count steps for walking, check phone and text messages, use the timer and alarm feature as well as ask Siri for the time of day.

“My smartphone is present in my life all the time now. If I didn't know how to use it with VoiceOver, I would be lost,” she said.

Marsha also appreciates the low-tech skills she has learned like marking her appliances   and using various writing tools.

Marsha’s vision loss comes from the male side of her family. Her father and his brothers were all blinded by a disease called chloridemia. But her father wasn’t properly diagnosed until in his 70s. She says that most of her life, her vision was okay because she is a carrier of the disease with no symptoms. But recently when she was driving, the lines on the road no longer appeared straight. This prompted a visit to the eye doctor for a diagnosis and later a difficult decision to totally stop driving.

“It's like cutting off a big part of your body when you have to stop driving, because you take things for granted when you can hop in your car and go to the grocery store or get your hair cut,” she said. “You have to depend on someone else or Uber. Someone to take you, someone to pick you up, the timing. Everything has to be coordinated. You can't do things spontaneously anymore. So, it's a whole different adjustment to life.”

Marsha is happy with the training she has received at Outlook Nebraska. Once she was out of town and after trying several finger swipes and taps to perform a function, her phone froze. She worked with her trainer by phone to troubleshoot the problem.

“He's great. He just has so much information. I was sometimes impatient because he'd tell me something and I wanted to proceed but he said, ‘Wait, wait, wait. Let's finish this’,” she said excitedly. “He has a lot of information and patience with someone who is learning. “

You can help more people with limited vision like Marsha have the chance to continue to use their technology and grow their confidence. We get calls every day from people losing their vision and family members seeking help. Your support is needed today. Outlook’s technology training and other programs are not sustainable without your help.